What Bit Me? How To Identify Bug Bites This Summer

The Guide To Summer Bug Bites: How To Find Out What Bit You

It happens to all of us: you’re out on a warm summer evening, minding your own business...and next thing you know, you’ve got a bug bite that’s itching like crazy!

Sometimes it’s easy to tell what bit you: maybe you reach down to swat at the bug and catch a glimpse of it. Sometimes, though, it’s harder to tell. You might not notice the bite as it’s happening. Instead, you don’t even realize you’ve been bitten until the spot starts to itch.

When this happens, do you ever wonder what bit you? It’s actually possible to tell (at least with reasonable certainty) based on the characteristics of the bite. Check out the descriptions below to find out what summer pest might have bit you.

Of all the bug bites on this list, mosquito bites might be the most common. They’re also one of the most annoying, as they tend to itch like crazy. It can be hard to identify a mosquito bite with 100% certainty, because they can present different symptoms in different people. Generally speaking, though, they tend to result in a small blister-like spot that eventually recedes and disappears. Mosquito bites can occasionally cause severe reactions: if you experience nausea, vomiting, chills, fever, headache, or any other unusual symptoms, seek medical attention immediately. 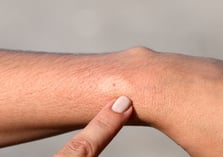 Not all bees are dangerous, and some are highly unlikely to sting. If you do get a bee sting, though, it can really hurt. Bumblebees can sting multiple times in a row, while honey bees are only able to sting once. In fact, the sting is fatal for them: their internal bits are pulled out as they attempt to pull away, due to the fact that their stinger is barbed (yuck!). Bee stings tend to present as red, swollen, dime- to quarter-size areas on the skin. The center of the sting is often a whitish color. Watch for allergic reactions: if you experience constriction of the throat, difficulty breathing, or any other unusual symptoms, head to the emergency room or call 911 immediately.

Wasp stings are quite similar to bee stings, except for the fact that all wasps are capable of stinging multiple times. Wasp stings can be extremely painful, particularly if you receive more than one of them. As with bee stings, seek medical attention if you experience the symptoms of an allergic reaction.

Dealing with a flea infestation can be a real pain. If you encounter fleas in your home, your best bet is probably to contact a home pest control company for flea control services. Flea bites show up as small red dots, and they can sometimes be mistaken for a rash. The bites often appear in groups of at least three or four, and are common around ankles, calves, and knees. 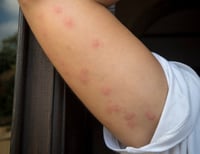 If getting rid of fleas can be a challenge, eliminating bed bugs in your home is even harder. When bed bugs bite, you generally won’t feel anything at all. However, you’ll begin to develop symptoms anywhere from one to three days later -- and many people develop fairly intense red welts. The itchiness can be severe, and the bites usually occur in groups. As with fleas, a home pest control company may be necessary to eliminate bed bugs.

Different spider bites will produce different symptoms. Non-poisonous spider bites (which account for the vast majority of bites that people receive) can be similar to bee stings. Poisonous spider bites on the other hand are a serious matter. Swelling and stiffness in the area can be severe, as can reddening of the skin as well as infection. If you suspect that you’ve been bit by a poisonous spider, seek medical attention right away.

Ticks are usually encountered in thickly wooded areas or tall, grassy fields. They’re capable of spreading illnesses like Lyme disease, and they burrow into your skin after biting. Aside from finding a tick sticking out of the surface of your skin, you may notice a rash in the area. If so, it’s important to seek medical attention, as the rash could indicate Lyme disease.

Fire ant stings are pretty easy to identify: they’re incredibly painful when they occur, and they eventually turn into raised, pus-filled blisters. They tend to result in considerable irritation, itching, and burning. As with other insect bites, seek medical attention if you experience any sort of a reaction.

Chiggers are actually members of the arachnid family, and chigger bites are quite common as far as bug bites go. You won’t feel anything when they bite, but you’ll experience itchy hive- or pimple-like spots later on. If the itching is particularly bad, you may need to see a doctor.

Scabies mites are unpleasant little creatures: the females actually burrow into your skin and lay eggs. The eggs later hatch, at which point the larva come up to the surface of the skin, molt, and then burrow down again. The resulting rash may look like acne, but it tends to itch like nobody’s business. If your symptoms are particularly troublesome, seek medical attention.

How to Avoid Bug Bites this Summer

Dealing with bug bites is no fun. Fortunately, though, effective home pest control services can cut down on your chances of being bit! If you’ve been bitten by any of the above insects in or around your home, contact Home Pest Control. Our Home Shield Pest Prevention Program provides comprehensive summer pest control for both your home and yard or garden.

Download our Summer Pest Control Guide below to find out what pests to keep an eye out for this summer and how to protect your family from painful bites and stings.