The Difference Between Mice And Rats And Why It Matters

Mice and Rats: What’s the Difference? (And Why Does It Matter?)

Oh no: you saw a rodent scurrying past you! Maybe it was in your basement, your attic, or the corner of your garage. Or maybe it was even in your kitchen. Regardless, the last thing you want is a rodent infestation in your home. One mouse is more than enough for you. It’s time to do something about your rodent problem before it gets any worse.

Come to think of it, though -- are you sure that you saw a mouse? Maybe you saw a rat. That’s when it hits you: you’re not sure you know the difference between a rat and a mouse. Aren’t they kind of the same thing? Is there a difference? And if there is, does it really matter? 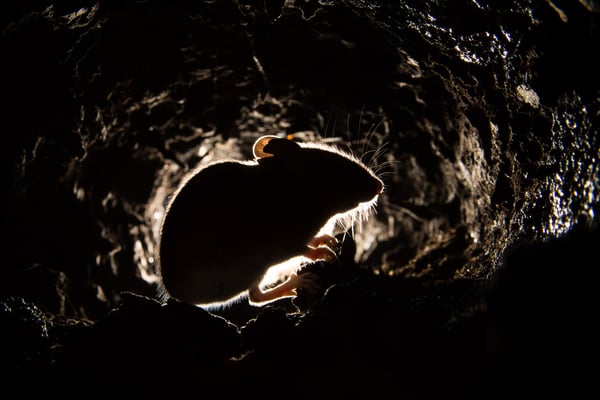 Below, we’ll take a look at all of the ways that mice and rats differ, including their appearance, the traces they leave behind, their habits and behavior, and what attracts them to your home. We’ll also discuss the risks associated with rats and mice, along with tips for mouse and rat control.

Appearance of Mice and Rats

A lot of people use the terms “mouse” and “rat” interchangeably. In fact, though, they refer to different creatures.

Here in South Carolina, the most common mouse you’ll run into is Mus musculus, the common house mouse. House mice are quite small, weighing just half an ounce and measuring no more than six to seven inches long (including their tail) when fully grown.

Rats on the other hand are much larger. Roof rats can weigh up to seven ounces, and the Norway rat can grow to be as large as 11 ounces! That’s more than 20 times the weight of the typical house mouse. Rats are typically much longer, too, measuring anywhere from 11 to 19 inches (tail included).

Both mice and rats can cause physical damage to your home, leaving behind tell-tale signs of their activity.

Mice will often chew through anything soft, including cardboard, drywall, wiring, soap, and other household items. They generally won’t chew a hole any bigger than the size of a dime, though, and the edges of the hole will be smooth.

Meanwhile, rats can gnaw on much harder materials like pipes and solid wood. They’ll also leave behind holes that are roughly the size of a quarter, and their holes will have rougher, more jagged edges.

As with the holes that they chew, the size of mouse and rat droppings tend to correspond to the size of the creatures responsible for them.

When it comes to nests, you’ll find that mice tend to build their homes in warm areas. Look for mouse nests near your water heater, refrigerator, or oven. Mouse nests are usually built of soft, shredded material such as paper.

Rat nests are larger, and less likely to be located near something warm. You’ll often find rat nests in your attic, although some rats will burrow underground to build a nest.

One way to determine whether you’re in need of rat or mouse control is by simply listening closely to the sounds they make. Mice are usually found in your ceilings and walls, and you can hear them squeaking and scratching (especially at night). Rats tend to be much louder than mice, and you’ll sometimes hear them fighting over food, too.

Mice and rats are different when it comes to breeding and lifespan, too. A female mouse can give birth to up to ten individual litters of mice per year, with five or six mice in each litter. These baby mice will be old enough to reproduce in about two months, and typically live for a year. Rats will give birth to fewer litters per year (perhaps four to six in total), but can have up to 12 offspring at a time. Rats can live longer than mice, too: some will live for up to two years.

What Attracts Mice and Rats to Your Home?

At this point, you might be wondering how to get rid of mice or rats. We’ll discuss rodent control in greater detail below. Before you take steps to get rid of rodents, though, it’s worth considering why they’re in your home in the first place.

Simply put, mice and rats are looking for a warm, safe place to live and reproduce. And like any other creature, they’re also in search of a source of food. Your home fits the bill perfectly, particularly if food is readily accessible (i.e. in unsealed containers in your pantry) and entry is easy (as is the case when you have openings and gaps around windows, pipes, and so on).

While mice might seem less problematic than rats, the reality is that both kinds of rodents present a serious risk to your health and home.

Both mouse droppings and rat droppings can carry disease causing agents such as viruses and bacteria. Sensitive individuals can also experience asthma as a result of rodent exposure. Additionally, both mice and rats can be extremely destructive. It’s not uncommon for rodents to chew through electrical wiring, walls, insulation, and other valuable parts of your home.

How to Get Rid of Mice and Rats

Getting rid of mice and rats on your own can be difficult. Sealing up points of entry can help prevent an infestation in the first place. But once you’ve got rodents in your home, your best bet is to contact a pest professional like Home Pest Control. We make rodent control easy! Contact us today to learn more about our affordable pricing.