Common Stinging Insects and How to Avoid Them

There are a lot of stinging insects out there, including bees, wasps, hornets, and yellow jackets. Being stung by any of these pests can be incredibly painful and, in some cases, cause severe allergic reactions that require medical attention. Many people don’t know how allergic they are until they get their first sting, which is why it’s so important to stay safe by keeping stinging pests as far away from your property as possible. 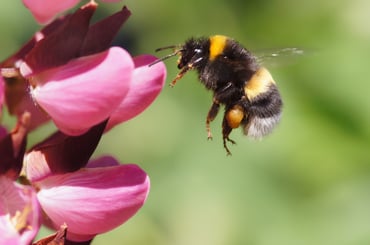 Attempting to remove a nest on your own is a dangerous endeavor, but there’s no need to try it at home when pest control professionals are trained to efficiently assess and eliminate stinging insect threats. Contact a professional if you think you may have a stinging insect problem.
Keep your children, family, and friends safe by being aware of any stinging insect nests in your yard or on your property. Read on to learn how to identify stinging insects so that you can respond in the most appropriate way if anyone gets stung.

Seeing or hearing any kind of bee nearby is likely to put you into defense mode, but before you go swatting away, beware! Some bees are vital members of a healthy ecosystem, so they need to be protected and removed carefully by professionals. Honey bees are one of those important species, as they are responsible for the fertility of many of our world’s most important agricultural products. That being said, if you’re not a beekeeper you still don’t want them making a home in your backyard because they do sting.
On this occasion, the honey bee’s stinger comes off of its body and gets stuck in the victim’s skin. Some people experience severe allergic reactions to these stinging insects.
Be on the lookout for honey bee nests in trees or structures, like sheds, which is why beekeepers intentionally house honey bees in special wooden boxes. We’ve all heard the cautionary song about picking up a baby bumble bee, so we know that these soft, gentle-looking insects can pack a powerful sting. However, unlike honey bees, bumble bees retain their stinger, meaning they can sting multiple times.
Bumblebees are very protective of their territory. If you disturb a bumble bee nest, brace yourself for the wrath. Bumble bees build their nests both below and near the ground, including around patios and attached to decks. Carpenter bees are unique in that, unlike honey bees and bumblebees, they live solitary lives.
While far less aggressive to humans than other bee species, carpenter bees can be a serious nuisance if you have any wooden features on your property. In fact, they are named for the way they create their homes by drilling tunnels into wood.
This can cause major structural damage on its own but also turn into a major infestation if they decide to lay eggs in the tunnel. These scavengers live in large colonies that can grow to as many as 4,000 members and are strongly attracted to sugars and proteins, meaning they’ll be the first guests to show up at your cookout!
While they may like to keep you company, yellowjackets are intensely territorial and have the ability to sting many times.
Yellowjackets live in paper-mâché style nests located close to the ground, so be sure to watch your step this summer! Paper wasps live in umbrella-shaped, flakey-looking nests, which they build in the spring. You’ll find these nests hanging from porch ceilings, tree branches, and other covered areas.
One nest can be used by several generations of wasps. The queen lives in the nest and raises her eggs there. Given the importance of the nest for a paper wasp colony, they’ll readily sting you if you threaten their nest. 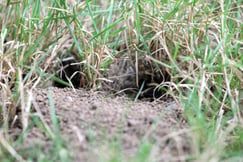 These stinging insects may be solitary, but they often nest near one another. They can be easily identified by their large size, which ranges from 1.25 to 1.5 inches long with a wingspan up to 3 inches.
While only the females have stingers, we don’t advise trying to figure out the gender of a cicada killer wasp, as the sting is extremely painful and
they will likely not bother you so as long as you’re not threatening their burrow.
You’ll want to be careful where you walk when searching for these wasps, as they burrow in sandy, well-drained areas where the grass is kept short like playgrounds, parks, and golf courses. Noticeably large, European hornets can be active during any hour. Introduced to the eastern part of the United States in the early 1800s, hornets live in medium-sized colonies of 200 to 400 insects and build their nests in holes and crevices. You’ll recognize a hornet’s presence by a papery cellulose envelope at the entrance to their nest.
European hornets sting when threatened, and their smooth stingers allow them to sting over and over again. Along with the pain of a sting, they can cause structural damage to your home, as they use cellulose (a component of wood) to create their nests. With their striking white faces and dark abdomens, bald-faced hornets are easily identifiable. These unique insects build large nests that can reach 24 x 14 inches. They have a unique habit of building a new nest every season, rather than re-using the same nests several times.
Bald-faced hornets are one of the more aggressive species of stinging insects, and they’ll attack even if only slightly provoked. They’re most active during the later summer months.

Accidentally trespassing on a stinging pest’s territory could end with painful, burning welts that ruin an otherwise perfect summer day. Keep stinging insects off of your property by working with a licensed pest control company to avoid DIY disasters.