Keep your eyes on the skies this spring, as millions of 3-inch long spiders are expected to begin casting webs that will parachute them from Georgia up as far as Delaware! While the image of palm-sized spiders is enough to send any arachnophobe into a major panic, South Carolina homeowners can rest assured that these leggy creatures are nothing to be afraid of. In fact, they're great to have on your property! Read on to learn the benefits our newest neighbors are bringing to town! 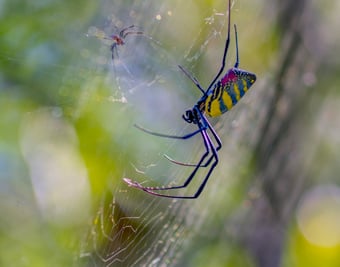 Though native to Southeast Asia, Joro spiders first migrated stateside back in 2014 after hitching a ride on a shipping container. Shortly after arrival, they began casting 10-feet deep webs into the wind, flying across Georgia at up to 100 miles at a time. Though they remained in Georgia for the next seven years, in September 2021, they had a baby boom of sorts, which researchers believe will force them to continue spreading north.

Before you go squashing one of these beauties in your backyard, you should know that they're considered harmless, as their venom poses no risk to humans or animals and their fangs are too small to even puncture human skin!

Unlike most invasive species, Joro spiders do a lot of good for our ecosystem by preying on some of our most dastardly spring pests, including:

Gardeners rejoice! Stink bugs and aphids wreak havoc on spring gardens and are not easy to get rid of, especially since stink bugs have no natural predators--until the Joro spider came to town, that is.

We often get asked about DIY pest control methods that can complement our services, and we're thrilled to report we've got one that actually works--Joro Spiders! Forget the Citronella candles this year and get yourself a couple of Joro spiders to snack on the menacing mosquitoes wreaking havoc in your yard!

At the end of the day, the most harm a Joro spider will cause is giving your family a good scare. These intimidating creatures may also become a bit of a nuisance due to their massive webs and leaving sacs full of 400-1500 eggs in your trees or bushes. Rather than removing the eggs, we recommend letting them hatch, as they'll only double down on your Home Pest treatments before they spread their webs and fly to a new destination.