How to Get Rid of Flying Ants: Top Tips for Ant Control

How to Get Rid of Flying Ants: Our Essential Flying Ant Control Tips

Few things are more frustrating than the sight of ants crawling around your kitchen, and trying to get rid of ants can be a challenge. Even after eliminating obvious food sources and doing your best to keep your kitchen tidy, you may find that you’re still struggling with ant control. 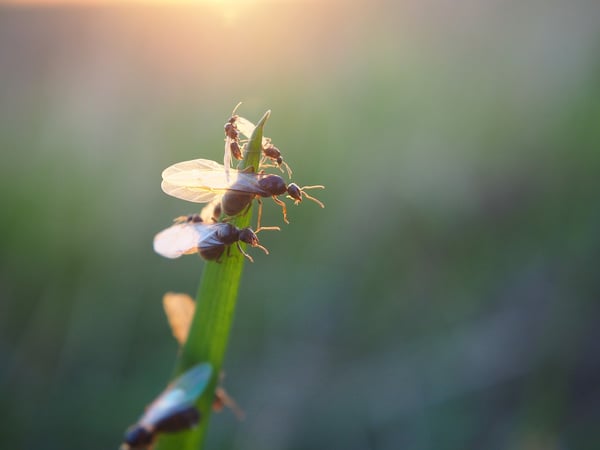 But how do you know for sure whether you have a flying ant infestation in your home? And if you do have flying ants, how can you determine which species you’re dealing with? Can you get ant bites from flying ants? Most importantly: how do you get rid of flying ants before they cause major damage to your home? We’ll answer all of these questions and more below.

What Are Flying Ants?
First and foremost, it’s important to understand that there’s not a specific type of ant known as a “flying ant.” This can be confusing for homeowners who think they’re dealing with a flying ant invasion. If you’ve never encountered an ant in flight and suddenly see ants flying in or around your home, it’s easy to conclude that you have “flying ants.” It’s more complicated than that, however.

All ants belong to the family of insects known as Hymenoptera. This term comes from the Latin for “to mate in flight.” As it turns out, virtually all species of ants are capable of flying. The reason you don’t often see ants taking flight is due to the fact that ants only fly at a certain stage of maturity: that is, when it’s time for them to mate.

Flying ants are typically encountered during the springtime in South Carolina, as that’s when mature ants leave their existing nest in order to breed. Ants need specific conditions to reproduce: they’re the most successful at breeding when there’s adequate sun, low wind, plenty of humidity, and warm temperatures. When these conditions exist following a brief period of rain, ants are especially likely to breed. Spring weather in South Carolina oftens fits this description, which is why you’re the most likely to run into a swarm of flying ants during the spring months.

Can All Ant Species Fly?
Most species of ants are capable of flying, so long as they’ve reached the proper stage of maturity. Ants destined for reproduction are fed by the colony’s workers, going through a series of immature stages of development before reaching reproductive maturity. This is why it’s not possible to identify a species of ant based strictly on its ability to fly.

Here in South Carolina, the species of flying ant that you’ll encounter most frequently is the carpenter ant. More on this below.

Can I Get Ant Bites from Flying Ants?
If you’ve ever suffered an ant bite, you know how uncomfortable they can be. Some people can experience a severe allergic reaction in response to an ant bite. For these individuals in particular, the thought of a swarm of flying, biting ants is frightening.

A given species of flying ant may be able to bite during flight, but this is dependent upon whether or not that species can bite or sting under normal circumstances. If the species doesn’t bite at other stages of maturity, they won’t bite in flight, either. However, species of ants that are capable of biting -- such as the carpenter ant -- can bite after reaching reproductive maturity and gaining the ability to fly.

Are Flying Ants Different from Termites?
Many homeowners confuse flying ants with termites. This is understandable, too: at first glance, termites and flying ants can look quite similar. Plus, some species of flying ants (such as the carpenter ant) are capable of boring holes into the wooden structure of your home, something that termites are known to do as well.

In order to tell whether you’re dealing with carpenter ants or termites, you’ll need to take a closer look at the insect in question.

Termites are characterized by:

Carpenter ants are also typically larger than termites, although this isn’t the most reliable means of distinguishing them.

At the end of the day, it can be difficult to be certain about whether you’re dealing with termites, carpenter ants, or another flying ant species. If you’re not sure, a knowledgeable Home Pest Control professional can help.

Are Flying Ants Dangerous for My Home?
While it’s common knowledge that ants can bite and sting, we don’t typically think of them as posing a threat to the structure of our home.

Here in South Carolina, though, the most typically encountered species of flying ant is the carpenter ant. This ant species is capable of causing thousands of dollars of damage to your home. While carpenter ants don’t actually ingest wood in the same way as termites, they do bore holes into the structure of your home as part of their nest building process. The end result is the same: structural damage to the wooden elements of your home.

If you encounter flying ants in your home, you’ll want to take action and get rid of them right away.

How to Get Rid of Flying Ants
Wondering how to get rid of ants in your home? First and foremost, you’ll need to determine what species of flying ant you’re dealing with. In South Carolina, this is typically the carpenter ant. However, other species of ants are also capable of flying. Figuring out which species of ant has invaded your home is important, as different species of ants are attracted to different food sources. Some ants prefer protein-based foods, while others are more drawn to sugar. In order to use the right type of ant bait to attract and kill ants, you’ll need to be sure that you’ve correctly identified the species that has invaded your home.

Of course, ant bait is only effective if it’s placed in the right location. To do that, you’ll need to identify where the ant nest in your home is located. Ant colonies can take up residence in hard to reach places, including basements, attics, and even inside your walls. For this reason, locating the nest can be challenging.

While there are consumer products available for dealing with ants, not all of them are effective. Incorrect use of consumer baits and pesticides can be dangerous, too. Considering the potential risk posed by flying ants, your best bet is to contact a professional pest control company like Home Pest Control. Our highly skilled professionals have the knowledge and experience necessary to get rid of ants in your home using safe, environmentally friendly methods.

Want to learn more about how to prevent pests all year long? Download our free pest control calendar for homeowners!

Why You Should Leave Pest Control to the Professionals

Signs You May Have a Pest Problem

Identifying a pest infestation doesn’t always mean seeing bugs crawling around your home. Read on to learn the more subtle