Bed Bugs: Can They Transmit Disease?

Most people associate bed bugs with seedy motel rooms, dirty linens, and scores of red, puffy, itchy bites. In addition, though, it’s commonly believed that bed bugs are dangerous to your health. Much as with ticks and Lyme disease, many people think of bed bugs as a disease vector. If you’ve brought them home with you from a night in an infested hotel or house, you might be worried about the potential of contracting some kind of illness. 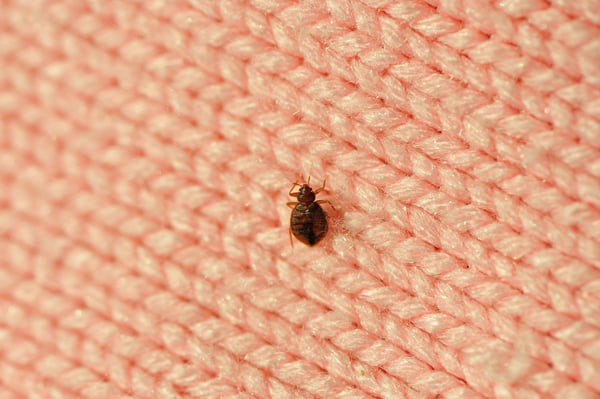 Let’s take a look at some of the facts and fictions surrounding bed bugs and disease. Then, we’ll move on to what you can do in terms of home pest control to take care of bed bugs once and for all.

First things first: up until very recently, bed bugs weren’t scientifically proven to carry any sort of transmittable disease. While popular belief might associate them with serious illnesses (much like rats and the plague, or ticks and Lyme disease), the CDC had concluded that they couldn’t actually carry any illness that can be passed along to humans.

Of course, this doesn’t preclude the possibility of serious complications from bed bug bites. In some people, symptoms are very mild: a person might have a slight reaction to a bed bug bite that involves a minor amount of itching. In certain segments of the population, though, bites from bed bugs can cause a serious allergic reaction. If you believe you’re experiencing a reaction to bed bug bites, it’s important to seek medical assistance immediately.

More recently, researchers have discovered new information regarding bed bugs and disease. According to a 2014 study conducted by the Center for Clinical Epidemiology and Biostatistics at Penn State University's School of Medicine, bed bugs are actually capable of transmitting a parasite known as Trypanosoma cruzi. This parasite in turn causes something called Chagas disease, which is one of the most deadly illnesses in Central and South America.

Chagas impacts over 6 million people per year around the world, and results in the death of roughly 50,000 people annually. However, bed bugs don’t spread the infection with their bite. Instead, the parasite is carried in their feces.

After feeding on a sleeping host, bed bugs will often deposit feces onto the host themselves. This sometimes happens on and around the face, which means the potential of transmitting Chagas is very real. Recently, Dr. Michael Z. Levy at the University of Pennsylvania’s Perelman School of Medicine managed to demonstrate that bed bugs can pass the Trypanosoma cruzi parasite on to mice in a controlled experimental environment.

Chagas disease is sometimes called a “silent killer,” due to the fact that it’s hard to recognize any symptoms while the disease is in its earliest stages. Over time, Chagas can lead to heart problems, digestive upset, and even neurological issues.

In addition to Chagas, some sources have argued that bed bugs are capable of spreading other diseases as well, including oriental sores, brucellosis, and even leprosy. There doesn’t appear to be any proof to back up these claims as of right now. Keep in mind, though, that the discovery of bed bugs’ ability to transmit Chagas is a very recent finding. New information may come to light in the future.

When to See a Doctor

As mentioned above, bed bugs don’t have to transmit disease in order to pose a potentially serious health hazard. If you think you’ve been bitten by bed bugs and feel that you’re experiencing any symptoms indicative of an allergic reaction, it’s important to contact a doctor right away.

Additionally, if you’re suffering from any unusual symptoms that you believe could be connected to a disease or disorder of some kind, don’t hesitate to contact a medical professional.

Even if you’re not experiencing serious symptoms as the result of a bed bug infestation, there’s no doubt about it: bed bugs are an awful pest to have in your home.

Eliminating them once and for all can be challenging, though. If you’re dealing with bed bugs, we highly recommend contacting Home Pest Control for a consultation. We offer safe, environmentally-friendly pest services designed to help you get rid of bed bugs fast.