Black Widow Spiders: What You Need to Know

No one likes dealing with bugs in their home. But of all the pests you might encounter, few are as scary as spiders. Also known as arachnophobia, fear of spiders is one of the most common human phobias, and possibly also the oldest. In fact, researchers believe it’s likely genetic. One look at a spider is enough for your genes to kick in and tell you to keep your distance. 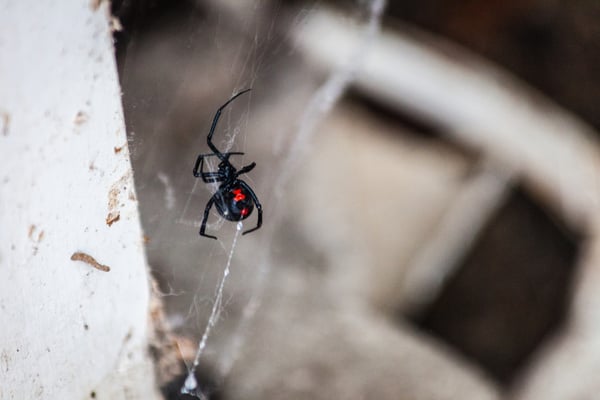 Of course, not all spiders are poisonous. We have our share of spiders in South Carolina, but many of the species we encounter are relatively harmless to humans. We do have a couple of especially poisonous species, however: spiders which are capable of inflicting serious, painful, and potentially even life threatening bites in humans and animals. Black widow spiders belong to the latter category.

Worried you might have black widow spiders in your home? Not sure how to identify them, or what to do if you encounter them? Are you wondering whether their bites are dangerous, or what you should do if you’ve been bitten? Perhaps most importantly of all, do you want to know how to prevent and get rid of black widow spiders?

We’ll answer all of these questions and more below. Keep reading for everything you need to know about black widow spiders.

What Are Black Widow Spiders?

Black widow spiders are one of roughly 3,000 species of spiders found in the United States. In fact, there are several species of the genus Latrodectus, or “widow,” spiders which are confined to specific geographic regions of North America.

Here in South Carolina, we tend to encounter Latrodectus mactans, the “southern widow,” as well as Latrodectus geometricus, the “brown widow.” Of the two, Latrodectus mactans is the one we typically think of when we imagine a black widow spider: they have long legs, a black body, and a red hourglass on the abdomen.

In terms of habitat, black widow spiders generally seek out dark and dry conditions for spinning their webs. In winter, they’re particularly drawn to warmer temperatures, and this often leads them indoors. When living outside, black widows show a preference for protected spots, preferring to take up residence underneath decks, piles of stones, firewood stacks, and inside of old tree stumps.

When it comes to indoor habitats, black widows are often found in sheds, barns, garages, and other outbuildings. They’ll also tend to congregate in basements, crawl spaces, and attics. The more cluttered an area is, the more likely it is to attract black widows. This is due to the fact that cluttered storage areas will tend to harbor more of their preferred prey than clean, well ventilated ones.

The black widow life cycle is quite long. Once they’ve hatched from their egg, a black widow will typically take a year to grow into a full adult spider. In some instances, a female black widow will eat her male counterpart after mating, which is where the common name “widow” is derived from.

Of all the spider species here in South Carolina, black widow spiders stand out as relatively easy to identify.

The body of a black widow spider is fairly small, measuring anywhere from 3 to 10 mm in diameter. Females are larger than males, however, and their bodies can sometimes measure up to 13 mm long.

As their name implies, these spiders are black in color. What sets them apart from other spiders is the characteristic bright red hourglass-shaped marking on their abdomen. This is hard to miss, and a dead giveaway that the spider you’re looking at is a black widow.

When it comes to spider bites, some are more dangerous than others. Black widow spiders in particular have a reputation for inflicting dangerous, poisonous bites. But are they really a threat, or is the danger exaggerated?

First off, it’s important to understand that black widow spiders won’t always bite. In fact, males very rarely bite humans. Females are more likely to bite than males, but these bites tend to be in self-defense, generally only occurring after they’ve laid their eggs.

When it comes to how dangerous their bites can be, black widow bites are actually the most toxic of all the spiders in the United States. The initial pain of a black widow bite will often cause local swelling at the site of the bite wound. Within a couple of hours, the victim may begin to experience muscle cramping and more severe pain. This cramping and pain will often radiate towards the center of the body from the direction of the bite, and some black widow bite victims have mistaken this pain for a heart attack. The pain of the bite can also be accompanied by sweating, nausea, fever, and an increase in blood pressure. Pain typically subsides within a few days.

If you’ve been bitten, it’s important to seek medical treatment immediately. Anyone who has suffered from a black widow bite is susceptible to tetanus, and you’ll need to get a booster if your tetanus vaccine is outdated. You may be given muscle relaxants or pain medication to help you deal with the bite, and in some instances you may need to be hospitalized.

While fatalities associated with black widow bites are rare, they do happen. Don’t wait to contact a medical professional if you’ve been bitten by a black widow. Go to a doctor or emergency room right away.

Now that you know just how dangerous black widow spiders can be, you’re likely wondering how to keep them from taking up residence in your home -- and what to do if you’re dealing with a black widow infestation.

When it comes to spider control, prevention is key. First off, it’s important to reduce clutter in storage areas in and around your home. If your attic, basement, or garage is full of boxes or other debris, removing this clutter can help cut down on the likelihood of black widow spiders taking up residence there. It’s also important to remove clutter from around the outside of your home. If you have a stack of firewood right next to your house, for instance, moving this firewood stack further from your home can reduce the likelihood that black widows will make the move from the firewood pile into your home come wintertime.

It’s also important to take various precautions when working outside or around your home. Always shake out your boots and gardening gloves before putting them on, particularly if these items are stored in a garage, shed, or basement. If you’re handling firewood, dealing with mulch, or working in an outdoor storage area, always wear gloves and a hat to protect your hands and head.

Of course, if you’re encountering black widows in and around your home or property, simple preventative steps may not be enough. In these instances, you’ll need to take action to get rid of black widows.

There may be some bugs that you can deal with on your own, but black widow spiders are dangerous. If you believe you’re dealing with a black widow infestation in your home, it’s important to contact a professional home pest control service. Here at Home Pest Control, our knowledgeable experts can get rid of your black widow infestation quickly and effectively. Attempting to remove black widows on your own puts you at risk of a potentially severe bite. Don’t take the risk: contact us today for assistance.

Keeping up with pest prevention throughout the year can be a challenge, but Home Pest Control is here to help. Download our Seasonal Pest Prevention Calendar for tips on when and how to treat for pests in winter, spring, summer, and fall.