Worried About Wolf Spider Bites? Find Out if Wolf Spiders are Poisonous

Here in South Carolina, we have our share of pests to deal with. Some are little more than a nuisance, while others are flat out frightening to find in your home. Wolf spiders are one of the more unpleasant pests that you might encounter, and the thought of being bitten by one is alarming. 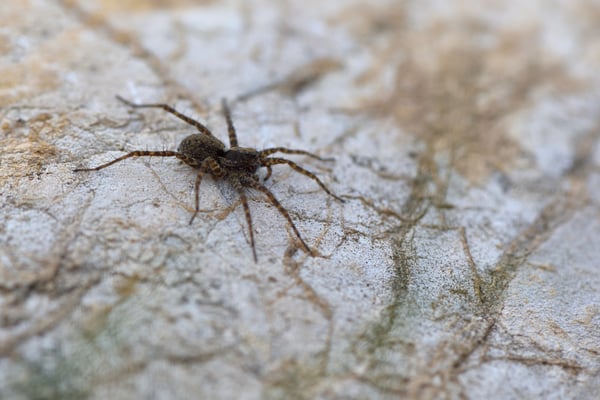 While wolf spiders aren’t poisonous, they are capable of biting -- and they’re venomous. Keep reading to find out more about this venomous spider, and learn more about pest and spider control.

As is the case with many species of spiders, wolf spiders can be quite frightening to encounter. With their large, hairy bodies and eight eyes, these creepy arachnids are an unsettling sight in the home.

Wolf spiders live up to their name: they’re hunters, preying on small insects both during the day and at night These spiders stalk their prey for extended periods of time before attacking, preferring not to associate with other members of their species until it’s time to mate.

These spiders will often enter homes through small cracks or underneath doors. Female wolf spiders carry their egg sacs with them wherever they go, which means that you may encounter one with an egg sac in tow.

While wolf spiders can be a worrying sight, the good news is that they’re not poisonous.

Rather than poisoning their victims, wolf spiders inject a venom which is meant to paralyze their prey. Fortunately for humans, wolf spider venom typically doesn’t cause more discomfort than a common bee sting. They also only bite humans on rare occasions, generally preferring to stick to the small insects they prey upon.

If you’re bitten by a wolf spider, you can simply wash the area, apply ice or a cold pack, elevate the area to reduce swelling (if possible), and use over the counter remedies for pain and swelling.

That said, there have been instances of wolf spider bites causing serious allergic reactions in humans. If you’ve been bitten by a wolf spider and believe you may be suffering from such a reaction, be sure to seek medical assistance right away.

While it’s possible that you may encounter wolf spiders in your home, they’re typically not found in large numbers. This species of spider prefers to breed and live outdoors at ground level, and they’re often found underneath ivy, landscaping, firewood, and other debris.

We typically think of pests in our home as nuisances. And, of course, no one wants to deal with a pest infestation -- least of all a spider infestation.

However, wolf spiders are rarely encountered inside homes or buildings. They prefer an outdoor habitat and never breed inside.

In fact, many experts consider wolf spiders to be helpful rather than a pest. Wolf spiders feed on a wide variety of insects, including a number of pests that can cause major damage to agricultural crops. In this sense, wolf spiders are actually beneficial to us.

Of course, it’s one thing to acknowledge that wolf spiders can be helpful when it comes to controlling agricultural pests, and it’s another to encounter one or more wolf spiders inside your home. If you do find wolf spiders in your home, you’ll want to get rid of them.

If you want to control wolf spiders in your home, prevention is the first and arguably most important step. Wolf spiders enter homes through small cracks and openings, and this means that you’ll need to ensure that your home is well sealed. Check around windows and doors for cracks and seal them up as needed.

Wolf spiders feed on small insects, and they may be attracted to your home by the presence of other bugs. If you find that you can’t effectively prevent wolf spiders on your own, or you’re dealing with another pest infestation that may be contributing to your wolf spider problem, it’s a good idea to contact a professional pest control company. At Home Pest Control, we have the knowledge and experience necessary to help you get rid of spiders fast. Plus, our environmentally friendly pest control methods are safe for you and your family.

Pest control starts with prevention, but effective pest prevention is an ongoing task. Wondering what should you do in the spring, summer, autumn, and winter to prevent pests in your home? Click here to download our free Seasonal Pest Prevention Calendar!