There are all sorts of pests out there, and some are more bothersome than others. Certain insects such as mosquitoes are more of a problem outdoors than inside your home, and other bugs -- such as crickets or beetles -- are more of a nuisance than anything else. 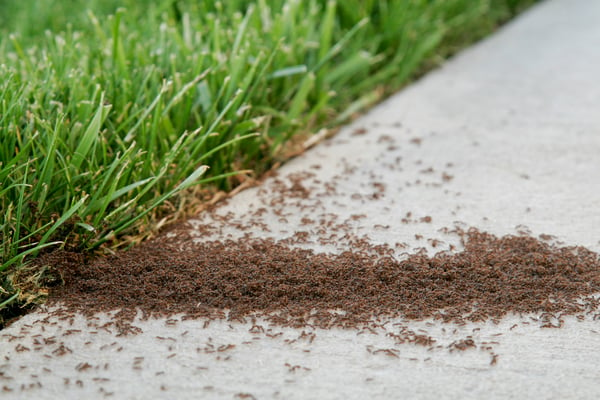 Once you have ants in your home or yard, getting rid of them takes serious effort. Before you can decide on an effective ant control method, though, you’ll need to determine what kind of ants you’re actually dealing with. There are a number of different ant species here in South Carolina, and each presents a different challenge when it comes to ant control and long term ant prevention.

Keep reading to learn more about how to identify and eliminate the top 5 most common types of ants.

Fire ants take their name from two things: their bright red appearance and their intensely itchy, burning bites. Like many other ant species, fire ants are quite small: they’re generally less than ⅕” in length, although queens will tend to be bigger.

While fire ants may be small, they also pose a serious threat to humans. For one thing, they tend to attack in large numbers. Some people have suffered hundreds of bites at once from fire ants. They can be particularly dangerous for small children and elderly people, who may not be able to protect themselves from the bites. Fire ant bites are also incredibly painful, and can even cause severe allergic reactions in some individuals.

If you’re dealing with a fire ant infestation in or around your home, you’ll want to contact a home pest control company immediately.

Formica ants are quite small, ranging in size from 4 to 8 mm. These ants can come in a variety of colors, including red, yellow, brown, and black.

Formica ants are commonly found in areas of open soil, as well as in and around greenery and dead wood. They’re much less common inside a home, though, as they feed on the sweet liquid secreted by aphids (small insects that in turn feed on green plant matter), and can actually be observed “farming” and “milking” aphids for food.

While formica ants don’t sting per se, they do bite -- and their bites are very unpleasant. They’re also capable of spraying an acid from their abdomen onto a perceived threat, such as a human hand. This acid can cause intense irritation, which can make formica ants quite dangerous to have around.

If you’re dealing with indoor formica ants, you’ll need to work with an ant pest control company in order to eliminate them. The only way to permanently get rid of formica ants is to kill the queen, which is something that a professional will have much better luck doing.

Argentine ants are found throughout the southeastern United States, but they’re not terribly dangerous to humans. That’s because they’re unable to sting, and can only bite. Their bites aren’t pleasant, but they’re less intense than bites from some other ant species (such as fire ants).

Like any other type of ant, getting rid of an Argentine ant infestation on your own can be a challenge. Using a professional ant control service is usually your best option.

Carpenter ants are found in many parts of the world, including right here in South Carolina. Compared to fire ants, carpenter ants can be quite large: some of them range all the way up to one inch in length. These ants often show up in and around old, damp, dead wood. If you live alongside a wooded area or have a lot of old wood piled up near your home, you could end up dealing with a carpenter ant invasion.

Aside from taking up residence in wood near your home, they can also bore holes into your house and nest there. If you find something that looks like sawdust in or around your home along with a number of black ants, you’re likely dealing with carpenter ants. These ants are particularly troublesome because of the damage they can cause to your home, they can cause a major amount of damage to your home, much in the same way that termites can wreak havoc on a wooden house.

If you detect signs of carpenter ants in or around your home, contact a home pest control company to have the situation assessed. You may have already suffered significant damage to your home, and it’s important to take action right away.

Black ants are common throughout the southeast, South Carolina included. They’re quite small, measuring just 1.5 to 2 mm in total length, and -- as their name implies -- they’re usually jet black, although they can also be dark brown. You’ll often see black ants on sidewalks outside during the summer, but they can show up inside, too. That’s because they love to feed on sweet sources of food such as fruits, sugar, and even corn meal.

Some black ants are too small to sting humans effectively, but that doesn’t mean that you can’t suffer the occasional sting from one. If you end up with a major black ant invasion in your kitchen, your risk of receiving a sting or bite increases.

Attempting to eliminate black ants can prove to be difficult, as you may be dealing with a large number of them. Consider contacting a home pest control company if your black ant infestation is severe.

Ant Control for Your Home

Once you’ve identified what type of ant you’re dealing with, it’s time to get rid of them! Rather than trying to do that alone, we highly recommend contacting a professional pest service like Home Pest Control. Our affordable, environmentally friendly pest treatment options are both safe and effective.